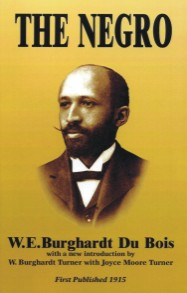 Originally published in 1915, Dr. W.E.B Du Bois' "little book," as he called it, was one of the most important and seminal works on Africa and African American history. It was small in size but gigantic in purpose. In it Du Bois, unquestionably an eminent historian, brilliantly attempted to encapsulate the ten thousand-year record of the people of Africa, then referred to as "Negroes." 1915, 2005. 281 pp.