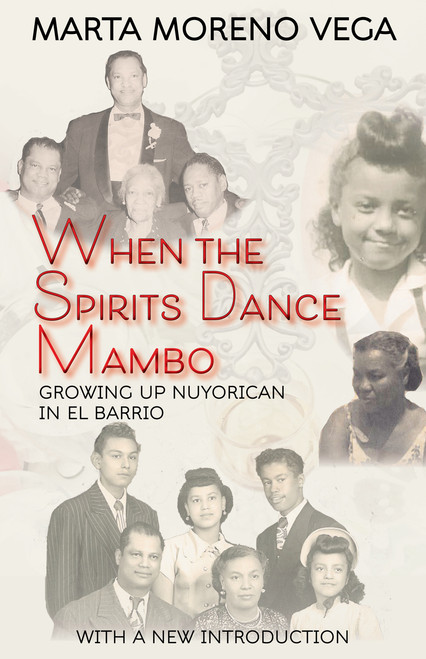 When rock and roll was transforming American culture in the 1950s and ’60s, East Harlem pulsed with the sounds of mambo and merengue. Instead of Elvis and the Beatles, Marta Moreno Vega grew up worshipping Celia Cruz, Mario Bauza, and Arsenio Rodriguez. Their music could be heard on every radio in El Barrio and from the main stage at the legendary Palladium, where every weekend working-class kids dressed in their sharpest suits and highest heels and became mambo kings and queens. Spanish Harlem was a vibrant and dynamic world, but it was also a place of constant change, where the traditions of Puerto Rican parents clashed with their children’s American ideals.

A precocious little girl with wildly curly hair, Marta was the baby of the family and the favorite of her elderly abuela, who lived in the apartment down the hall. Abuela Luisa was the spiritual center of the family, an espiritista who smoked cigars and honored the Afro-Caribbean deities who had always protected their family. But it was Marta’s brother, Chachito, who taught her the latest dance steps and called her from the pay phone at the Palladium at night so she could listen, huddled beneath the bedcovers, to the seductive rhythms of Tito Puente and his orchestra.

In this luminous and lively memoir, Marta Moreno Vega calls forth the spirit of Puerto Rican New York and the music, mysticism, and traditions of a remarkable and quintessentially American childhood.

by Susan Taylor
“Viva Marta Moreno Vega! With honesty, humor, and love, she relives her coming-of-age in Spanish Harlem—the highs and the lows—eloquently documenting how deeply rooted West African cultural traditions are in her rich Puerto Rican heritage. Marta Vega’s memoir makes me want to mambo.”

Publishers Weekly Review
In this vivid work, which shares its title with a 2002 documentary Vega produced, two tales flawlessly merge: one recalls an Afro–Puerto Rican girl’s upbringing in 1950s Spanish Harlem; the other explains the background for the author’s eventual status as a priestess of the Santeria/Lucumi religion. What could have been a familiar coming-of-age story is made fresh with Vega’s painterly detail and use of background music (Celia Cruz, Machito and Tito Puente’s sounds are present throughout). The sorrows of early school (“the classroom was a joyless cell”) give way to double-dutch jumping, puberty, Vega’s first crush and her emerging interest in preserving her family’s traditions. “Music,” her grandmother Abuela, an espiritista (a sort of spiritual psychic), tells her, “is the food of the soul, and the right music calls the spirits.” At Abuela’s apartment, Vega learns of the orishas (gods and goddesses) and observes Abuela’s bóveda (altar); together, they visit the botánica for healing oils. Lovelorn at 14, Vega confides in Abuela, who summons a spirit named Juango to command her body. “Trying to understand Juango was difficult enough, but talking about sex with a spirit possessing my grandmother’s body was startling.” And thus the author’s future path begins. The spiritual and musical journey Vega takes readers on is informative and inspiring, even for the uninitiated.

Amazon.com by Elizabeth Hernandez (2004)
I actually cried at the end of this book. I bought it the day it went on sale and read it pretty much into the night. Marta Vega’s story is both unique and universal. This book tells the story of her growing up in Spanish Harlem (El Barrio) and portrays the loving, close-knit working class who raised her. Her mama and abuela come across as very strong, resilient women, particularly her grandmother, who was an amazing soul. The book’s title takes its name from the Latin/Island music that played everywhere in their neighborhood and home, and the orishas–spirit guardians–who Marta learned about from her grandmother. This is a very memorable, moving book. READ IT!