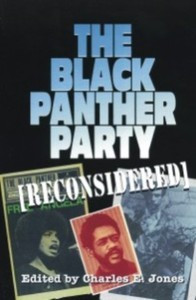 THIS IS A SAMPLE OF THE BLACK PANTHER PARTY RECONSIDERED

The Black Panthers was the most effective grassroots black revolutionary group in American history — but one whose legend, replayed in sensationalized news stories, a major movie, and countless publications, has outlived the group itself. Featuring never-before-published reflections from former members as well as tables and illustrations, this pioneering collection of essays examines this unique organization in depth using a new approach that places the views of former Panthers alongside those of historians and cultural commentators. The result is a vital dialogue between inside and outside perceptions and realities. A section on gender dynamics offers a much-needed examination of the role of women in the Party. Other essays in the volume address the social forces that gave rise to the Party, the organizational dynamics involved in maintaining its activities, and the internal and external factors that eventually contributed to the Party's decline. Neither strict memoir nor analysis, but combining elements of both, The Black Panther Party Reconsidered turns a welcome lens on this much-misunderstood group. 519 pages.

Also available as an amazon Kindle e-book. Note: you will be re-directed to Amazon.com's website.