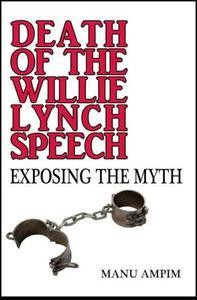 (E-book) Supposedly given in 1712, the "Willie Lynch Speech" is widely believed to be authentic. Actually, as revealed in this book, it is an amateurish and malicious hoax. Unfortunately, many people taken in by this hoax have spread and championed it. An extreme example of this championing occurred in 1995 at the Million Man March. There, the "Willie Lynch Speech" was dramatically repeated. Marchers and millions around the world who witnessed the March through television and radio were presented with this hoax as fact and history.

This volume contains the fake "Willie Lynch Speech," correspondence between Ampim and the admitted hoaxer, and the hoaxer's confession.

This is part of our interview on The African History Network Show with Prof. Manu Amipm. He is a Historian and the author of "Death of The Willie Lynch Speech". He deals with how the Willie Lynch Speech of 1712 is a fraud and provides irrefutable evidence. You can order his book "Death of The Willie Lynch Speech" from his website www.ManuAmpim.com. You can listen to the entire episode of our show including the full interview with Prof. Manu Ampim and Dr. Leonard Jeffries at http://tobtr.com/s/5723521. Here's an article which is an interview with Dr. Ashanti who Prof. Manu Ampim exposed as the author of the Willie Lynch Speech. More proof that it is a FAKE. http://www.thedurhamnews.com/2013/04/06/2796585_the-willie-lynch-letter-history.html You can never figure out how to solve a problem unless you understand the history of how you go into the predicament in the first place. People who don't study real history and think we are in our situation because of a fictitious person called Willie Lynch delivering a speech on the banks of the James River in 1712 is a ridiculous as parents teacher their children that a mythological character flys from the North Pole in a sled pulled by magic reindeer and brings the Christmas Gifts. The gifts that you receive are real but the explanation of how they got there is false. You will never understand where the gifts came from until you KNOW THE TRUTH. If the Truth makes you FREE, what does a LIE do? Please do not confuse using a myth to teach a lesson with passing a myth off as real history. Those are 2 different things. Visit www.TheAfricanHistoryNetwork.com for a wide selection of DVD Lectures including titles from Michael Imhotep. Listen to The African History Network Show with host Michael Imhotep, every Thurs, 8pm-11pm EST at www.TheAfricanHistoryNetwork.com or http://www.blogtalkradio.com/theafricanhistorynetworkshow or by phone, when we are LIVE at (914) 338-1375. Episodes are also archived on www.Itunes.com.