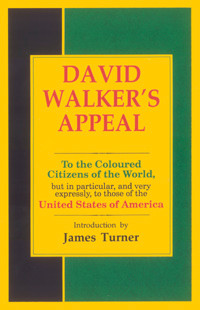 (E-book) David Walker's Appeal is an uncompromising African-centered discourse that attacks white injustice and advocates Black self-reliance. Its publication in 1830 intensified the debate and struggle against slavery. More than a petition against slavery, the Appeal is a foundational document from which many contemporary themes in Black political philosophy have evolved. Walker asserted the right of Black people to defend themselves against a common enemy by any means necessary. Because of his Appeal, David Walker remains one of the most durable political figures in our history. His clear presentation of the problems confronting people of African descent is prophetic, and it assures the relevance of the Appeal to contemporary readers. Includes an Introduction by Dr. James Turner, a leading thought leader in Africana and African American Studies.