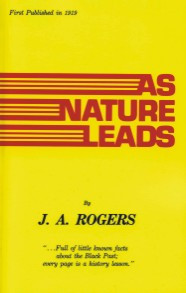 (E-book) As Nature Leads, an early work by J.A. Rogers (1883-1966), was originally published in a limited edition in 1919 as a sequel to his first book, From Superman to Man. Within a short time, As Nature Leads became obscure and until now could only be found in a few public libraries and even fewer private collections.

Born in Jamaica, Rogers became a naturalized American citizen in 1917. As a youth, he received little formal education; he was largely self-educated. His life as a journalist, historian, and publisher is made more significant by this fact.

In As Nature Leads, Rogers focuses on the seldom discussed topic of Black "blood" in the White race. Through a series of letters and conversations, between two friends, Rogers crates a forum to discuss Black/White inter-mixture in ancient and modern times. He also discusses the impact this inter-mixture has had on human history. Rogers believed the notion of White racist thought rested on a fragile conception of a "pure" White race. Protracted study of Black and European history led Rogers to the controversial conclusion that constant sexual contact between Blacks and Whites rendered the belief in a "pure" White race meaningless. By exposing the extensive inter-mixture and intermarriage of Blacks and Whites, Rogers was attacking White racist thought at its roots.

As Nature Leads was the first of several works Rogers would devote to this still delicate topic. His three-volume study Sex and Race and another single volume published later, Nature Knows No Color Line were also devoted to this subject. Typical of woks by Rogers, As Nature Leads is full of little known facts about the Black past; every page is a history lesson. Its republication verifies that as early as 1919 Rogers distinguished himself as the historian of whom W.E.B. DuBois would write, "…no man living has revealed as many important facts about the Negro race as has Rogers." Readers who are familiar with Rogers will welcome As Nature Leads to their collection. First time readers of Rogers will find this work to be a pleasant introduction.