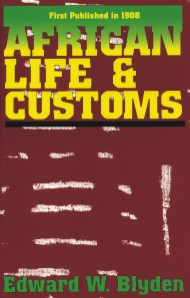 (E-book) African Life and Customs is an essential collection of Edward Wilmot Blyden's articles that examine the socioeconomic structure of African society. A native of St. Thomas, West Indies; Blyden (1832-1912) lived most of his life on the African continent. He was an accomplished educator, linguist, writer, and world traveler who strongly defended the unique character of Africa and its people.

African Life and Customs is an impressive African-centered interpretation of African culture.