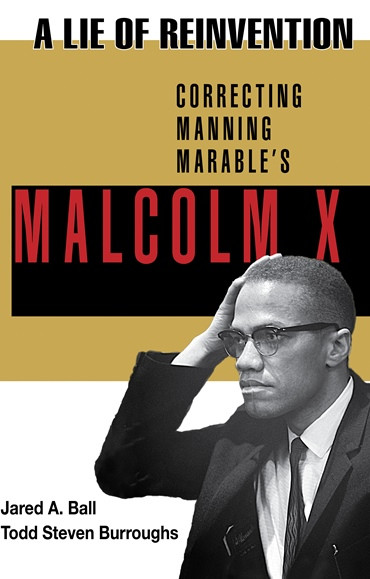 (E-book) A Lie of Reinvention: Correcting Manning Marable's Malcolm X is a response to Manning Marable’s biography of Malcolm X, A Life of Reinvention. Marable’s book was controversially acclaimed by some as his magna opus. At the same time, it was denounced and debated by others as a worthless read full of conjecture and errors, while being devoid of any new factual content. In this collection of critical essays, editors Jared Ball and Todd Steven Burroughs lead a group of established and emerging Black scholars and activists who take a clear stance in this controversy: Marable’s biography is at best flawed and at worst a major setback in American history, African American studies, and scholarship on the life of Malcolm X.

In the tradition of John Henrik Clarke’s classic anthology “William Styron’s Nat Turner: Ten Black Writers Respond,” this volume provides a striking critique of Marable’s text. In 1968, Clarke and his assembled writers felt it essential to respond to Styron’s fictionalized and ahistorical Nat Turner, the heroic leader of one of America’s most famous revolts against enslavement. In A Lie of Reinvention, the editors sense a different threat to an African American icon, Malcolm X. This time, the threat is presented as an authoritative biography. To counter the threat, Ball and Burroughs respond with a barbed collection of commentaries of Marable’s text.

The essays come from all quarters of the Black community. From behind prison walls, Mumia Abu-Jamal revises his prior public praise of Marable’s book with an essay written specifically for this volume. A. Peter Bailey, a veteran journalist who worked with Malcolm X’s Organization for Afro-American Unity, disputes how he is characterized in Marable’s book. Bill Strickland, who also knew Malcolm X, provides what he calls a “personal critique” of the biography. Younger scholars such as Kali Akuno, Kamau Franklin, Sundiata Keita Cha-Jua, Christopher M. Tinson, Eugene Puryearand Greg Thomas join veterans Rosmari Mealy, Raymond Winbush, Patricia Reid-Merritt, Amiri Baraka, Margo Arnold, and Karl Evanzz in pointing out historical problems and ideological misinterpretations in Marable’s work.

To purchase this e-book, please visit one of the sites below by clicking on the store link: