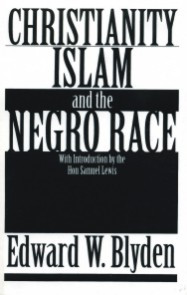 A native of St. Thomas, West Indies, Edward Wilmot Blyden (1832-1912) lived most of his life on the African continent.  He was an accomplished educator, linguist, writer and world traveller, who strongly defended the unique character of Africa and its people.  Christianity, Islam and the Negro Race is an essential collection of his writings on race, culture, and the African Personality.

The Black Classis Press edition is a complete reproduction of the 1888 revised and corrected edition.  It remains an important source for examining an early African-centered perspective on race, religion and the socioeconomic development of Africa. 432 pages.