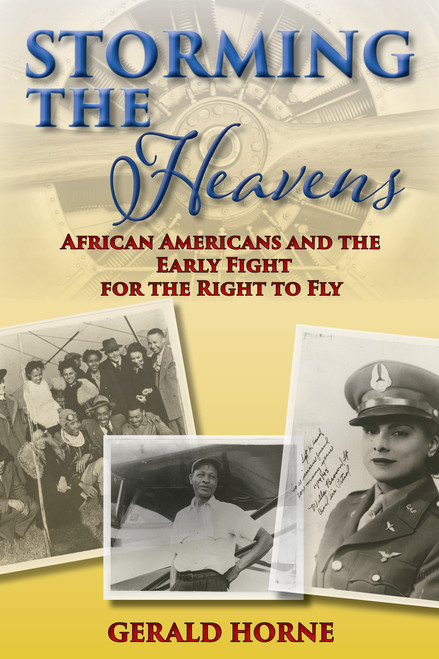 The recent Hollywood film 'Hidden Figures' presents a portrait of how African-American women shaped the U.S. effort in aerospace during the height of Jim Crow.  In Storming the Heavens, Gerald Horne presents the necessary back story to this story and goes further to detail the earlier struggle of African-Americans to gain the right to fly.  This struggle involved pioneers like Bessie Coleman, who traveled to World War I era Paris in order to gain piloting skills that she was denied in her U.S. homeland; and John Robinson, from Chicago via Mississippi, who traveled to 1930s Ethiopia where he was the leading pilot for this beleaguered African nation as it withstood an invasion from fascist Italy, became the personal pilot of His Imperial Majesty, Haile Selassie and became a founder of Ethiopian Airways, which to this very day is Africa's most important carrier.  Additionally, Horne adds nuance to the oft told tale of the Tuskegee Airmen but goes further to discuss the role of U.S. pilots during the Korean war in the early 1950s.  He also tells the story of how and why U.S. airlines were fought when they began to fly into South Africa—and how planes from this land of apartheid were protested when they landed at U.S. airports.   This riveting story climaxes with the launching of the Soviet satellite, Sputnik, in 1957 which marked a new stage in the battle for aerospace and helps to convince the U.S. that the centuries-long fixation on the "race race" was hampering the new challenge represented by the "space race." This conflict was unfolding as the battle to desegregate public schools in Little Rock, Arkansas was spotlighting, globally, the bleeding wound that was Jim Crow and sheds light on how and why depriving African-Americans of skills and education was causing the nation to fall behind.   Thus, in this embattled context, barriers are broken and African-Americans who once endured inferior conditions on planes and in airports and in airport manufacturing facilities alike, gained added impetus in their decades long struggle to win the right to fly.