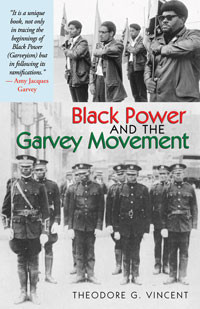 (E-book) Theodore Vincent provides valuable insight into understanding Marcus Garvey, the global breadth and depth of his influence and the origins of the Universal Negro Improvement Association (UNIA). From the first paragraph, Vincent unequivocally declares that he intends to "set straight" many of the stories then surrounding Garveyites and Garveyites. He writes, "...historians have left us with an impression of Garveyism as an oversized sect or cult, an escapist pseudo-religion of which Garvey was God...but in its time, the UNIA was the most powerful organization of black people in the world...". Initially intended to explore black militancy in the 1920's from the point of view of the Black power struggles of the 1960s, Vincent, in 2006, adds a new introduction, providing new perspective, since Black Power and the Garvey Movement was first published in 1970.

Purchase the kindle e-book for $7.99. Note: you will be re-directed to amazon.com's website.