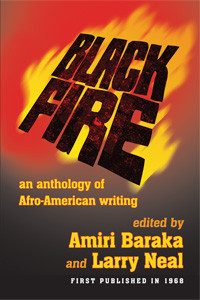 (E-book) The importance of this anthology, first published in 1968, lies in its comprehensive content and captures the essence of a movement that was coined by Neal as the "aesthetic and spiritual sister" of the Black Power concept. Black Fire is considered one of the seminal works of the period; it presents more than 180 selections from 75 writers, considered to be literary thought leaders of the period. The contributor list includes John Henrik Clarke, Sonia Sanchez, Kwame Ture (Stokely Carmichael), Harold Cruse and Stanley Crouch. In this revised second edition, Baraka provides a new introduction that captures his reflections on the book and the Arts Movement, roughly 40 years after the first publication. The first edition of Black Fire went through at least 8 printings and is priced from $50-$200+ on the secondary/used bookstore market.