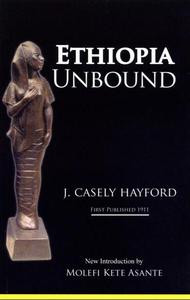 From the Introduction by Molefi Kete Asante. This book is extraordinary in its optimism. One could approach the book as a novel, a philosophical treatise, a dialogue of rationalism an Edwardian romance, or as a meditation on love of self, family, and community. It is all of these and more because it is filled with Greek myths as reference and is a sound political tract on the contemporary strivings of the Turks and the Russians as well as British colonial life. Yet Hayford is certain in the end that there would be victory over the colonial oppression in the Gold Coast and that his people, the Fante, would enjoy their own freedoms and independence as citizens equal to any in the world. For him, this is the aim for the entire Ethiopian world, by which he means all of Africa. "Rise, you mighty giant! Rise! Ethiopia will soon be unbound!" And so it was.  First published 1911. 2010. 225 pps. Paper.